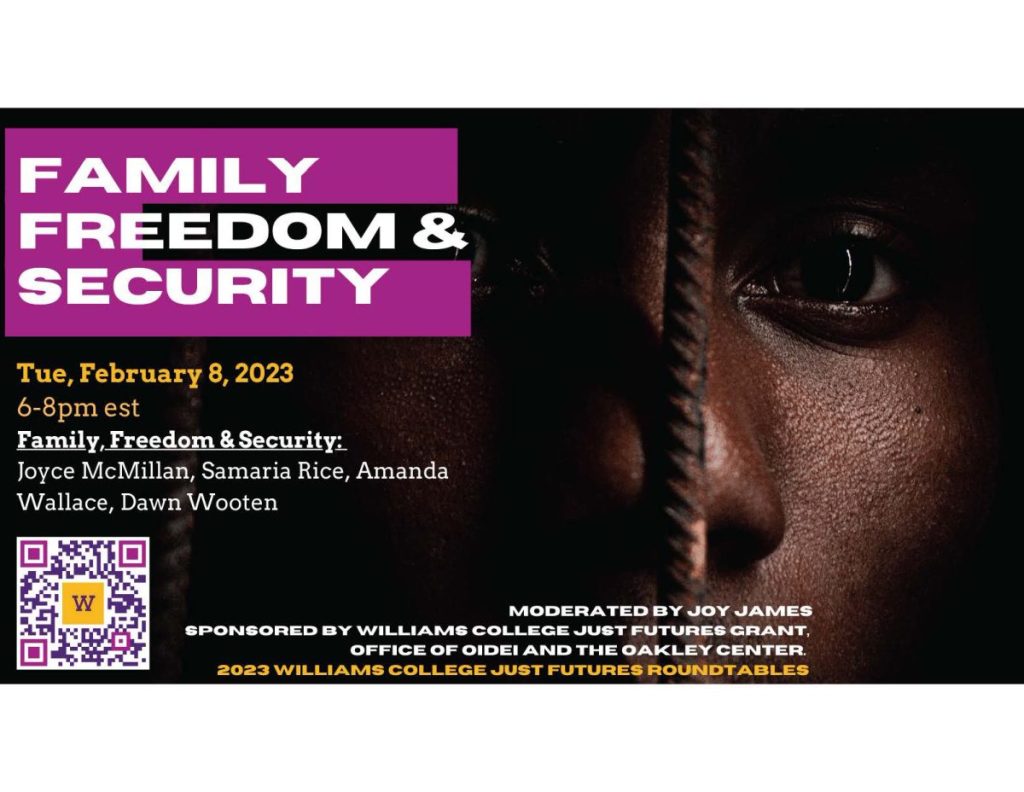 To join the live webinar, please use the link below.

Joyce McMillan is a thought leader, advocate, activist, community organizer, and educator. Her mission is to remove systemic barriers in communities of color by bringing awareness to the racial disparities in systems where people of color are disproportionately affected. Joyce believes before change occurs the conversation about systemic oppression that creates poverty, and feeds people of color into systems must happen on all levels consistently. She completed a restorative certificate program at the New School and says change will not happen independently of healing. Her ultimate goal is to abolish systems of harm while creating concrete community resources.

As a mother, political advocate, and the founder and CEO of the Tamir Rice Foundation, Ms. Samaria Rice proudly serves as an advocate for juvenile rights in Cleveland, Ohio. Since the murder of her 12-year-old son Tamir by Cleveland Police in 2014, Ms. Rice has committed her life to being on the frontlines for change. Samaria’s passion for civil rights reaches across lines of difference, uniting us all to work towards change. Following Tamir’s death, Samaria has used her voice in the service of her son’s legacy. Samaria encourages us to take back our communities by standing up for justice, her voice resonating with many mothers and children in our community. She has become a motivating force for families and communities across the nation.

Amanda Wallace received her Bachelor’s of Social Work from the University of North Carolina at Greensboro. With a 10-year career as a Child Abuse Investigator, Amanda worked throughout several counties in North Carolina. While working on the frontlines protecting children from Abuse and Neglect, Amanda simultaneously protected families from the oppressive Child Protection System. Watching the rights of families decrease and the power of CPS increase, Amanda realized that she had become the silent enforcer for an oppressive system.  It was then that Amanda understood the system and the perceived power given to CPS by society.  In May of 2021, Amanda founded Operation Stop CPS, an organization on the frontlines in the fight to abolish the Family Regulation System

Dawn Wooten,LPN, worked as a nurse at the Irwin County Detention Center (ICDC), an Immigration and Customs Enforcement (ICE) immigration detention center in Ocilla, Georgia. As COVID-19 began to spread like wildfire in early 2020, particularly in congregate settings like immigration detention facilities, Ms. Wooten became gravely concerned about failures at ICDC to comply with CDC guidelines and protect immigrants and workers alike from the coronavirus and other misconduct, including shredding detainees’ requests for medical care. In addition, numerous immigrant women detainees began to ask her about gynecological procedures they underwent that made them sterile without understanding why or what they experienced. Ms. Wooten began raising concerns internally to her supervisors about the harmful conditions and medical mistreatment at ICDC, only to find herself demoted to an on-call position with no subsequent calls for work. Unable to stay silent knowing about the risk of ongoing harm to the immigrants detained at ICDC, she secured pro-bono legal counsel to assist her in filing whistleblower complaints with the Department of Homeland Security (DHS) Office of Inspector General (OIG) on September 14, 2020, and with Congress on September 17, 2020.

Joy James is Ebenezer Fitch Professor of Humanities at Williams College. She is the author of Resisting State Violence; Shadowboxing: Representations of Black Feminist Politics, Transcending the Talented Tenth and Seeking the Beloved Community. James has published numerous articles on: political theory, police, prison and slavery abolition; radicalizing feminisms; diasporic anti-black racism; and US politics; and writes on the Captive Maternal through the lens of “The Womb of Western Theory.” Creator of the digital Harriet Tubman Literary Circle at UT Austin https://repositories.lib.utexas.edu/handle/2152/7828, James is editor of The New Abolitionists: (Neo)Slave Narratives and Contemporary Prison Writings; Imprisoned Intellectuals;Warfare in the American Homeland; The Angela Y. Davis Reader; and co-editor of the Black Feminist Reader. James’s most recent books include: In Pursuit of Revolutionary Love and New Bones Abolition: Captive Maternal Agency and the Afterlife of Erica Garner.

This event is part of the Captivity, Betrayal, Community Just Futures Roundtable series and is cosponsored by the Oakley Center and the Office of Institutional Diversity, Equity and Inclusion. Following the Spring 2022 ENTWINED: Indigenous, Afro-Indigenous, African American roundtable series organized by the Williams Just Futures grant, Captivity, Betrayal, Community examines how the historical impacts of enslavement and dispossession impact and are confronted by contemporary educational and ethical endeavors.