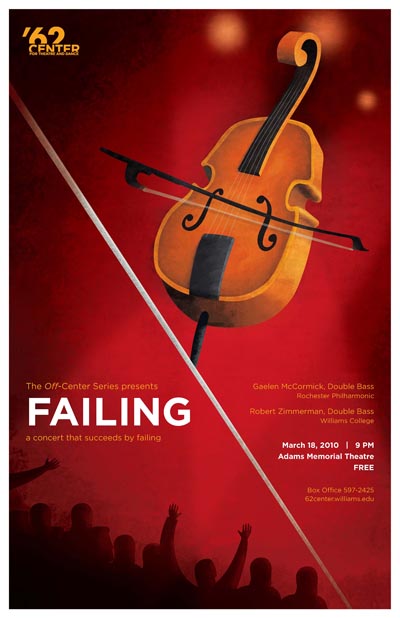 A double bass performance that succeeds by failing!

Rochester Philharmonic double bassist, Gaelen McCormick, in a performance of works centered around the idea of failing. The central performance piece will be Tom Johnson’s Failing, A Very Difficult Piece for Solo String Bass, a work designed to have the performer fail. “Bassists are a brave lot,” says Johnson of those who take on the work. Robert Zimmerman, double bass instructor at Williams College, will be a guest artist.

The performance will have four additional contemporary works for double bass, solos and duets, with a post performance artist reception. The works will include: New York Philharmonic’s David Walter’s Bach inspired work Homage a Casals. This work is an homage to the iconic cellist Pablo Casals. Francois Rabbath’s Poucha Dass is an Indian meditative work. Dave Anderson’s Seven Duets is a comical work that runs the spectrum from a witty reflection of contemporary, intellectual composers to the chaos of rush hour traffic. Anderson is the principal bass of the Louisiana Philharmonic. Finally is Hans Werner Henze’s Serenade, which is often described as nine very brief “postcards from the edge.”