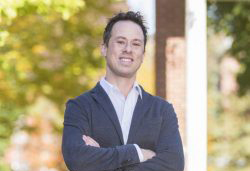 Professor of Mathematics Chad Topaz will discuss “Patterns, Swarms, and the Unreasonable Effectiveness of Mathematics” in the first of six annual Faculty Lecture Series talks the year. Topaz is an applied mathematician whose research on complex and nonlinear systems has been supported continuously by the National Science Foundation since 2006. A versatile investigator, Topaz examines problems in biology, chemistry, physics, and the social sciences through several lenses, including data science, modeling, analysis, topology, geometric dynamical systems, numerical simulation, and experiment… all with an eye towards understanding and predicting complex behavior. Prof. Topaz earned his A.B. from Harvard University and his Ph.D from Northwestern.

The Faculty Lecture Series was founded in 1911 by Catherine Mariotti Pratt, the spouse of a faculty member who wanted to “relieve the tedium of long New England winters with an opportunity to hear Williams professors talk about issues that really mattered to them.” The current chair of the series is Greg Mitchell, Associate Professor of Women’s, Gender and Sexuality Studies and chair of the Lecture Committee.

The aim of the series is to present big ideas beyond disciplinary boundaries. The lectures will be offered on February 7, 14, 21, 28 and March 7 and 14. All lectures will begin at 4:15 p.m. in Wege Auditorium, Thompson Chemistry and be followed by a reception in Schow Atrium. The lectures are free and open to the public.