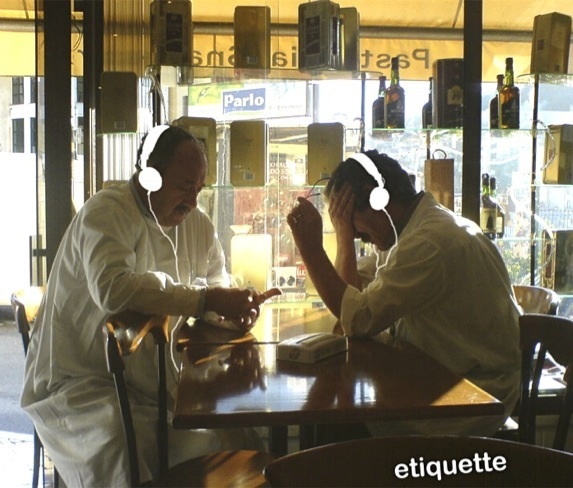 Etiquette is an intimate two-person performance in a public space where you are the performers! British artists Rotozaza will reprise their sold-out New York City performance of Etiquette. Etiquette is a half-hour experience for two people in a public space. There is no-one watching – no one else is aware of it. You wear headphones which tell you what to say to each other, or to use one of the objects positioned to the side. There is a kind of magic involved – for it to work you just need to listen and respond accordingly. Etiquette is theatre at its most raw; it is live, insightful, philosophical and incredibly unique. The participants are both the actors and the audience, and the show offers the fantasy of being able to speak without having to think what to say.www.rotozaza.co.uk

This intimate event will take place at Tunnel City Coffee, at 100 Spring Street in Williamstown, October 6th to 10th from noon to 6 pm. Reservations can be made by emailing mws1@williams.edu or calling the box office at 413-597-2425.Tickets are free. There will be 12 “spots” each day for two people.

Etiquette has been performed across the world. It has been translated into 10 languages. The UK’s Guardian says, “Etiquette explores the gap between language and meaning. In creating an entirely private space in a public setting, something extraordinary happens.” “This is a magical, unthreatening experience… the act of relinquishing responsibility for thought, word and action is unique and the effect is unmissable.” British Theatre Guide

Etiquette is presented as a co-production between the ’62 Center for Theatre and Dance and Mass MoCA.