EMERGENT SYSTEM: A conversation about work at the intersection of art, music, and computer science 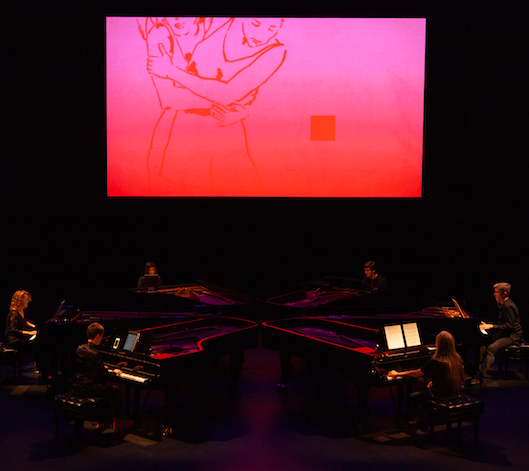 Presented by the Departments of Computer Science and Music

The film explores the boundaries of narrative—it begins abstract and concludes with a story, but dwells mostly in the liminal space between the two. The animation techniques used in EMERGENT SYSTEM reach back in time in the history of the form to early 20th century “visual music” works by artists like Mary Ellen Bute and Oskar Fischinger, through rotoscoped drawings, and all the way forward to images generated by code. The story it weaves is a parable about patterns made of patterns, the human mind, and emotion.

The work’s finale (~20 seconds) was generated by a machine learning algorithm “trained” with frames from the rest of the film—developed by Chan Woo Kim ‘23, working with Frankel and Prof. Andrea Danyluk, as a Winter Study.

Joshua Frankel ‘02 is a visual artist working in a range of old and new media, including drawing, printmaking, film, opera, and animation—which often sits at the center of each project. His work has been presented by institutions including BAM, the Library of Congress, the New Museum, the Film Society of Lincoln Center, the UN World Urban Forum, the San Diego Symphony, EMPAC, the Wassaic Project, as well as at New York City’s River to River Festival, where his animation took over 50 video advertising screens in the Fulton Center, synchronized to music performed live by a chamber ensemble and five vocalists. His film, PLAN OF THE CITY (2011), created in collaboration with composer Judd Greenstein ‘01 and NOW Ensemble, was called “One of the best matches of visuals to music I’ve seen” by Anne Midgette of The Washington Post and “Gorgeous” by Alex Ross of The New Yorker. He is currently at work on an opera about Robert Moses and Jane Jacobs that will feature multi-channel animation throughout, titled A MARVELOUS ORDER (2021, expected), in collaboration with Greenstein and former US Poet Laureate Tracy K. Smith.

Grammy-nominated composer Missy Mazzoli was recently deemed “one of the more consistently inventive, surprising composers now working in New York” (The New York Times) and “Brooklyn’s post-millennial Mozart” (Time Out New York), and has been praised for her “apocalyptic imagination” (Alex Ross, The New Yorker). Mazzoli is the Mead Composer-in-Residence at the Chicago Symphony Orchestra, and her music has been performed all over the world by the Kronos Quartet, eighth blackbird, pianist Emanuel Ax, Opera Philadelphia, Scottish Opera, LA Opera, Cincinnati Opera, New York City Opera, Chicago Fringe Opera, the Detroit Symphony, the LA Philharmonic, the Minnesota Orchestra, the American Composers Orchestra, JACK Quartet, cellist Maya Beiser, violinist Jennifer Koh, pianist Kathleen Supové, Dublin’s Crash Ensemble, the Sydney Symphony and many others. In 2018 she made history when she became one of the two first women (along with composer Jeanine Tesori) to be commissioned by the Metropolitan Opera. That year she was also nominated for a Grammy in the category of “Best Classical Composition” for her work Vespers for Violin, recorded by violinist Olivia De Prato. More info: https://missymazzoli.com/about/