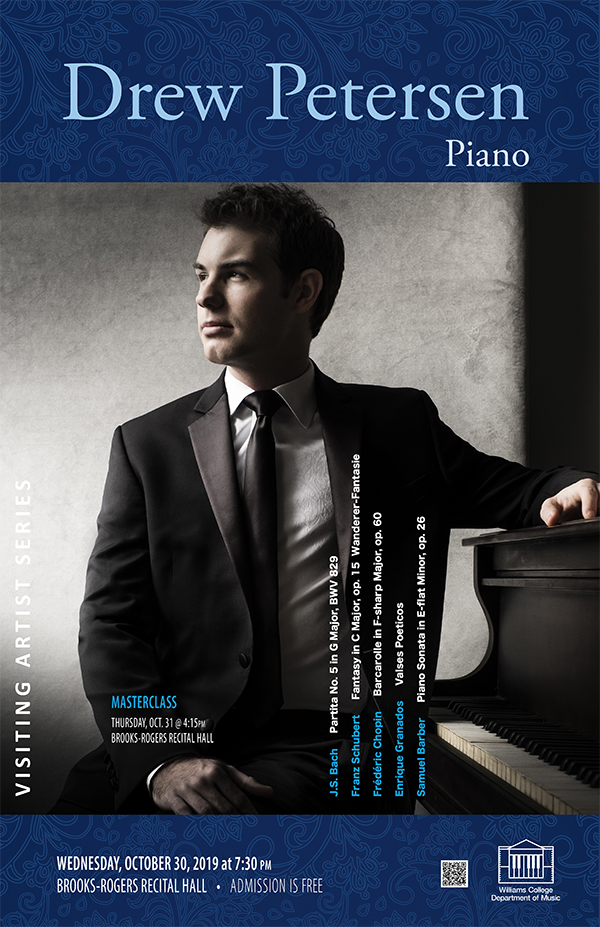 Acclaimed young American pianist Drew Petersen is a sought-after soloist, recitalist, and chamber musician. He has been praised for his commanding and poetic performances of repertoire ranging from Bach to Zaimont, and is the recipient of the 2018 Avery Fisher Career Grant, 2017 American Pianists Award, and the Christel DeHaan Fellow of the American Pianists Association, as well as a residency at the University of Indianapolis.

Since then he has made debuts with the Houston, Phoenix, Tucson, Pacific, and Milwaukee Symphony Orchestras, and has appeared in solo recitals at the Gilmore International Keyboard Festival, University of Indianapolis, and Dame Myra Hess Concerts in Chicago. Most recent performances include concerts at Lincoln Center’s Mostly Mozart Festival and Brevard Music Center’s Summer Festival, orchestral performances with the Indianapolis Symphony, and a recital at Chicago’s Ravinia Festival. 2018 also marked the release of his first solo recording of American music on the Steinway label for which BBC Music Magazine acknowledged his presence as a rising star. The 2019-2020 season includes appearances with orchestras in Sarasota, Fort Smith, Buffalo, Waco, and Columbus, as well as recitals in Madison, Duluth, Savannah, and his Kennedy Center debut, presented by Washington Performing Arts.

A frequent radio contributor, Petersen has performed on McGraw-Hill Young Artists Showcase, From the Top, and Performance Today. Profiles include The New York Times, New York Magazine, and the documentary “just normal” by award-winning director Kim A. Snyder. A champion of chamber music, Petersen has appeared on French radio’s France Musique while a member of a Verbier Festival piano trio.

Drew Petersen’s firm belief in the importance of music in contemporary society led to collaborations with Young Audiences NY that presents performances in New York City’s public schools. His appearance in Andrew Solomon’s New York Times bestselling book, Far From the Tree, sparked a nation-wide conversation on raising extraordinary and different children who test the willpower and capabilities of their families and society. Petersen continually advocates for the necessity of classical music and other arts in society, and was named a 2006 Davidson Fellow for his portfolio entitled Keeping Classical Music Alive.