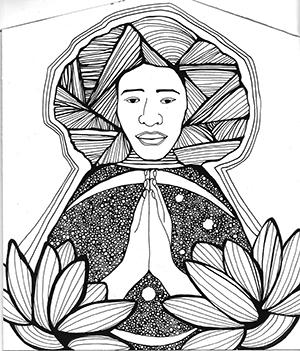 Visitors are invited to enter and leave the sound installation Dragonchild any time during the posted hours.

Dragonchild is presented by D. A. Mekonnen:

“Dragonchild is a project (throwing forward), and a contract (pulling together). It is a compensatory measure assigning value to the appropriation of identity, bodies, and cultural property. It bills white supremacy for damages. It begins in 2042, extending 25 years into the past to its midpoint in 2017 and 25 years before that to 1992.”

“Throughout its period, Dragonchild exists as a series of performances in galleries and museums. Dragonchild exists as a installation-radio show, vinyl and tape only, because f*** that mp3 noise. Dragonchild collects and re-presents Black free music, free of charge, to people with ears. Dragonchild asserts the invention of the saxophone in the previous Millennium in Afar, by dragons, forged in dragonfire, and its appropriation by the Belgian Adolphe Sax. It returned to Ethiopia in the last Century, and was simultaneously used by Getatchew Mekurya and people of the Diaspora like John Coltrane and Pharoah Sanders in occupied America to present statements in the form of blessings to the meta-consciousness of culture. These statements were frozen on records and continue to receive embodiment inside ears.”

“Dragonchild claims the right to compensation for these statements and the theft of the saxophone. Dragonchild questions the value of presenting art for free, when the “White” people pervert its meaning, using it to falsely prove and justify physical and mental torture and enslavement. Dragonchild asserts the immanence of Native, queer, Black, anti-hegemonic humanity. Dragonchild seeks to build consent culture, the opposite of rape culture. Dragonchild embodies the nonbinary future. Dragonchild sees you.”

About D. A. Mekonnen
Growing up in Texas as a first generation Ethiopian-American, Danny Mekonnen often heard the sounds of traditional Ethiopian instruments and vocals. By the time he was an accomplished saxophonist, he sought out master Ethiopian musicians to learn to play the traditional instruments of his heritage.

Mekonnen is the founder and director of the Debo Band, whose self-titled debut was included on NPR’s 50 Favorite Albums of 2012. The group’s groundbreaking take on Ethiopian music has lead to performances at the Montreal Jazz Festival, New Orleans Jazz & Heritage Festival, Lincoln Center, The Kennedy Center, South by Southwest, Sauti za Busara (Zanzibar), and the Ethiopian Music(s) Festival (Addis Ababa).

He has a M.A. in ethnomusicology from Harvard University where he researched Ethiopian popular music of the 1960s-1970s. In 2007, he taught a UNESCO course in musical ethnography at the Institute of Ethiopian Studies, Addis Ababa University. He also served as the director of the Nile Project, an ensemble comprised of musicians from the eleven countries of the Nile Basin, including Ethiopia, Sudan, and Egypt, each a major stakeholder in the region’s political, environmental, and cultural stability. He is currently working on a commission for Silkroad, the ensemble founded by cellist Yo-Yo Ma, honoring the life and music of Alice Coltrane-Turiyasangitananda.