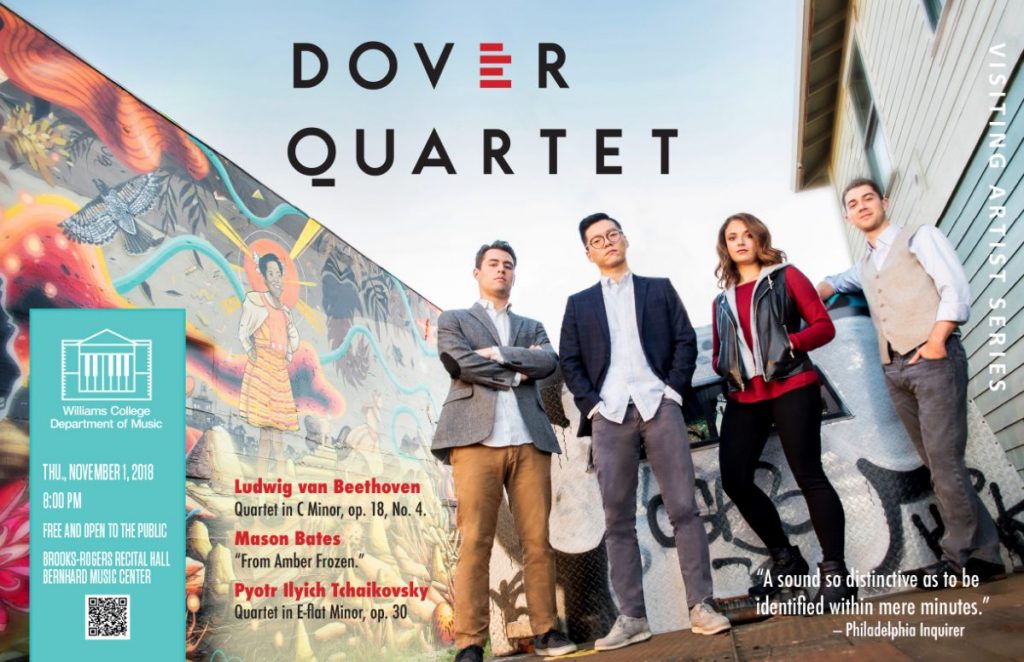 The phenomenal Dover Quartet catapulted to international stardom following a stunning sweep of the 2013 Banff Competition. Recently named the Cleveland Quartet Award winner, and awarded the coveted Avery Fisher Career Grant, the Dover has become one of the most in-demand ensembles in the world. The Quartet’s rise from up-and-coming young ensemble to occupying a spot at the top of their field has been “practically meteoric” (Strings). With its burnished warmth, incisive rhythms, and natural phrasing, the Quartet’s distinctive sound has helped confirm its status as “the young American string quartet of the moment” (New Yorker). The Quartet serves as the quartet-in-residence for the Bienen School of Music at Northwestern University.

In 2017-18 the Dover Quartet performed more than a hundred concerts around North America and Europe. The Quartet opened the season with performances for Texas Performing Arts, Chamber Music Houston, and Performance Santa Fe before appearing for the Kennedy Center, Philadelphia Chamber Music Society, Library of Congress, Detroit Chamber Music Society, the La Jolla Music Society, and throughout North America and Europe. The Quartet performed together with the superstar violinist Janine Jansen and pianist Jean-Yves Thibaudet in Carnegie Hall’s Stern Auditorium, and will also continue multi-year residencies for the Walton Arts Center’s Artosphere, Peoples’ Symphony, and the Amelia Island Chamber Music Festival.

Hailed as “the next Guarneri Quartet” (Chicago Tribune), the Dover Quartet draws from the lineage of that distinguished ensemble, as well that of the Cleveland and Vermeer Quartets; its members studied at the Curtis Institute of Music and Rice University’s Shepherd School of Music, where they were mentored extensively by Shmuel Ashkenasi, James Dunham, Norman Fischer, Kenneth Goldsmith, Joseph Silverstein, Arnold Steinhardt, Michael Tree, and Peter Wiley. It was at Curtis that the Quartet first formed, and its name pays tribute to Dover Beach by fellow Curtis alumnus Samuel Barber. The group has since returned for residencies to Rice in 2011-13, and to Curtis, where it became the conservatory’s first Quartet-in-Residence, in 2013-14. In addition, in 2015 the Dover was appointed the first Resident Ensemble of Peoples’ Symphony Concerts in the 116-year history of New York City’s oldest concert series.

The Dover Quartet is dedicated to sharing its music with under-served communities and is actively involved with Music for Food, an initiative enabling musicians to raise resources and awareness in the fight against hunger.