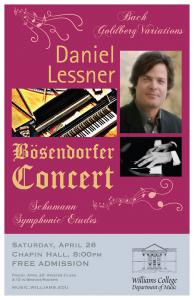 Lessner returns to Williams after joining conductor Ronald Feldman and the Berkshire Symphony Orchestra to perform Rachmaninoff’s Third Concerto in December 2006. This evening of music will include two of the towering masterpieces in all of music, Bach’s legendary Goldberg Variations and Schumann’s Symphonic Etudes, op. 13.

Lessner has thrilled audiences around the world with his dazzling performances and poetic interpretations of the great masterworks of the piano repertoire. Critics have hailed his playing as “brilliant and blazing” and have called him “a musician of pristine artistic taste and discernment.”

Lessner has won countless national and international prizes, including the Muir Award for the top young talent in the state of Florida and  First Prize at the acclaimed Interlochen Music Camp’s Concerto Competition. Mr. Lessner graduated from the Juilliard School where he won the Tchaikovsky Concerto Competition and performed with the Juilliard Orchestra in Lincoln Center’s Alice Tully Hall. Other highlights include performances at Carnegie Hall in New York City, and Disney Concert Hall in Los Angeles where he played Rachmaninoff’s Rhapsody on a Theme of Paganini with the California Philharmonic. He has toured extensively throughout the United States and South America in over one hundred cities, and even on the Amazon river in Brazil.

Mr. Lessner was a winner in the sixth Palm Beach International Piano Competition, and was the only American to reach the finals. He was recognized for most outstanding performance in the works of Chopin and Liszt. As a result, he was contracted by the Orchestra de San Luis for a special concert tour throughout Argentina, where he performed the Beethoven Concerto Nr. 4 in G. Mr. Lessner plays Gershwin’s Rhapsody in Blue on a series of award winning United Airlines commercials. He has been on the faculty of the University of Southern California as a Professor of Piano.

In addition to performing, Mr. Lessner enjoys a career as a composer of music for film and television and lives in Los Angeles. Visit DanielLessner.com for the latest updates on his concert appearances, to watch him perform live, or to find his CDs, which are also available on I-tunes