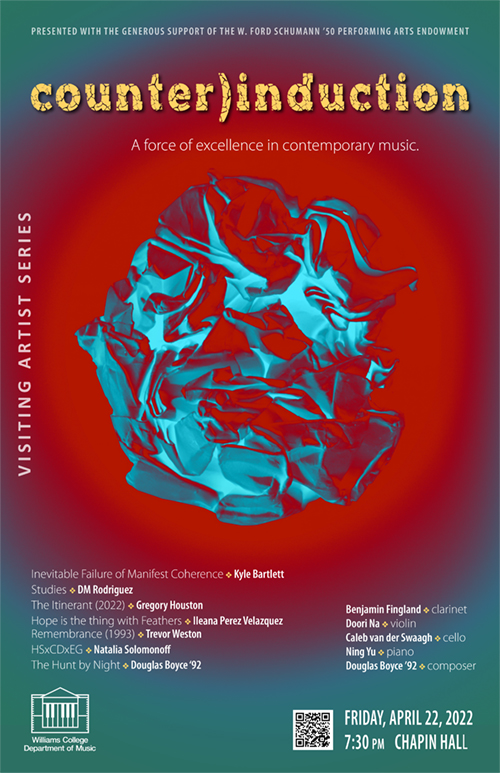 Benjamin Fingland, clarinet
Doori Na, violin
Caleb van der Swaagh, cello
Ning Yu, piano
Douglas Boyce ’92, composer
In its twenty years of virtuosic performances and daring programming, the composer/performer collective counter)induction has established itself as a force of excellence in contemporary music. Hailed by The New York Times for its “fiery ensemble virtuosity” and for its “first-rate performances” by The Washington Post, c)i has given critically-acclaimed performances at Miller Theatre, Merkin Concert Hall, the Philadelphia Chamber Music Society, Music at the Anthology, Casa Italiana, and The George Washington University.

counter)induction is the winner of an ASCAP/Chamber Music America Award for Adventurous Programming and is the recipient of the Aaron Copland Fund for Music Recording Grant and the Chamber Music America’s Classical Commissioning Grant. c)i has headlined numerous festivals, including the Music at the Anthology Festival, Boston Conservatory New Music Week, the Columbia Music Scholarship Conference, and the conference of the International Consortium for Auditory Display.

Since emerging in 1998 from a series of collaborations between composers at at the University of Pennsylvania and performers at the Juilliard School, counter)induction has premiered numerous pieces by both established and younger emerging American composers; including Eric Moe, Suzanne Sorkin, Ursula Mamlok, and Lee Hyla. c)i has also widely promoted the music of international composers not often heard in America, including Jukka Tiensuu, Bernhard Gander, Gilbert Amy, Dai Fujikura and Vinko Globokar.

From Beijing to Boston, from Yale University to Rochester’s Strong Museum of Play, counter)induction inspires audiences of every age and background. With two decades of teaching experience, c)i has led programs ranging from interactive performances with kindergarten classes to workshops with emerging composers from the University of Pennsylvania, Boston Conservatory, and The George Washington University.

Ever since its inception twenty years ago, c)i’s mission has been straightforward: world-class performances of contemporary chamber music, without hype and without agenda other than a complete commitment to the most compelling music of our day.

counter)induction is presented by the Williams College Department of Music with the generous support of the W. Ford Schumann ’50 Performing Arts Endowment.