Countdown to 2020: A Conversation with Howard Dean 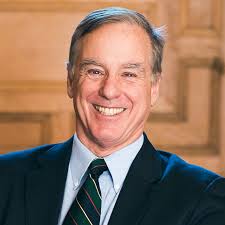 Dean is an American physician, author, and retired politician who served as Governor of Vermont from 1991 to 2003 and as Chair of the Democratic National Committee (DNC) from 2005 to 2009. He was a candidate for the Democratic nomination in the 2004 presidential election. His implementation of the fifty-state strategy as head of the DNC is credited with Democratic victories in the 2006 and 2008 elections. Afterward, he became a political commentator for MSNBC and CNN as well as a consultant to McKenna Long & Aldridge, a law and lobbying firm. During spring 2009, he is teaching a seminar for the Leadership Studies Program on “Leadership in a Global World.”

Crowe has been a member of the Williams faculty since 2009. He holds a B.A. from Williams and a Ph.D. from Princeton and is the author of Building the Judiciary: Law Courts, and the Politics of Institutional Development as well as articles on various aspects of American political and constitutional development.

The event is free and open to the public and is sponsored by the Leadership Studies Program.