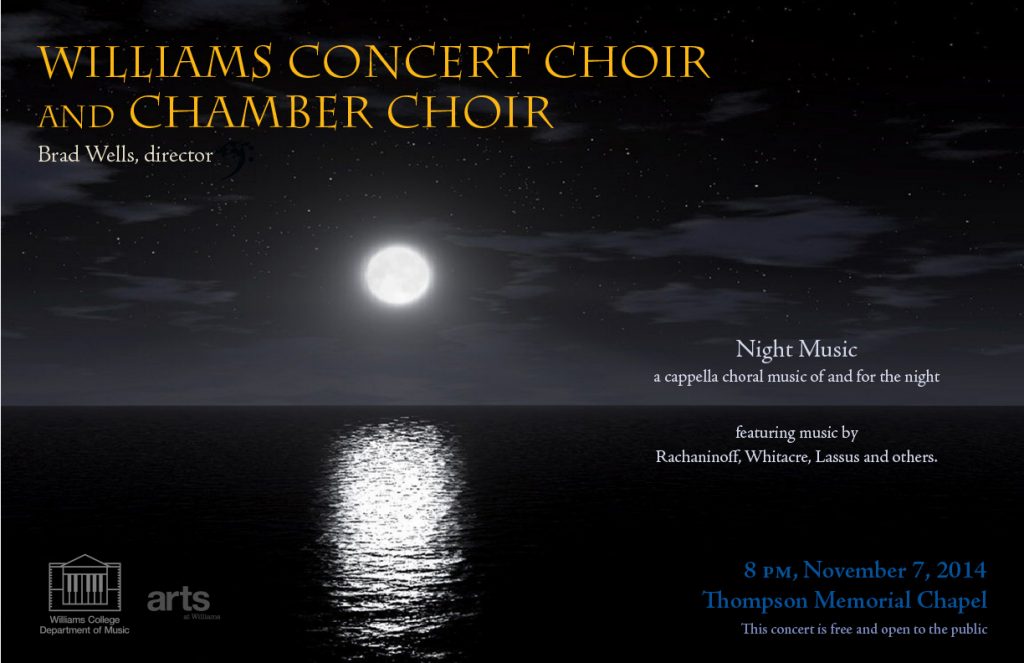 The Williams College Department of Music presents a concert titled ”Night Music: a cappella choral music of and for the night,” performed by the Williams Concert Choir and the Williams Chamber Choir and conducted by Brad Wells in Thompson Memorial Chapel on the Williams campus on Friday, November 7 at 8 p.m.  This free event is open to the public.

The concert features unaccompanied choral works by Rachmaninoff, Whitacre, Lassus and others.

About Williams Concert and Chamber Choirs

Williams College has long had a fine tradition of music performance in its choral ensembles. Director Bradley Wells has helped that tradition flourish. The choral program has much to offer students interested in singing, with a number of performances throughout the year, a wide range of repertoire, recordings and tours.

Conductor, singer, and composer Brad Wells directs the choral program, oversees and teaches studio voice, and leads courses in conducting, arranging and voice science and style.  Wells is also founder and director of Roomful of Teeth, a professional vocal ensemble dedicated to creating new music that incorporates the full range of the singing voice, from bel canto to yodeling to Tuvan throat singing. A champion of Estonian choral music, he has led the U.S. premieres of works by numerous Estonian composers including Raimo Kangro, Jüri-Ruut Kangur, and Lembit Veevo.  He has lectured and published articles on the physiology and acoustics of non-classical vocal styles and the role of singing in film.  As a singer he has performed and recorded with such ensembles as Paul Hillier’s Theatre of Voices, Philharmonia Baroque Orchestra (under Nicholas McGegan and Philip Brett) and the California Choral Company (under William Dehning). In 1998 he was the recipient of the Aidan Kavanagh Achievement Prize from the Yale Institute of Sacred Music.  Wells received the Doctor of Musical Arts (2005), Yale University; Master of Musical Arts (1998), Yale University; Master of Music (1986), University of Texas at Austin; B.A. (1984), Principia College.