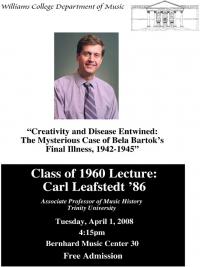 The Williams College Department of Music will present a Class of 1960 Lecture by Carl Leafstedt ’86 titled Creativity and Disease Entwined: The Mysterious Case of Bela Bartok’s Final Illness, 1942-1945, on Tuesday, April 1 at 4:15 p.m. in Bernhard Music Center, room 30 on the Williams College campus. This free event is open to the public.

Leafstedt, appointed to the Trinity University Music Department faculty in 2001, is a music historian specializing in 19th- and 20th-century American and European music. A graduate of Williams College, where he majored in both chemistry and music, he received his Ph.D. in music from Harvard University in 1994. Prior to joining Trinity he taught on the faculties of The University of North Carolina at Greensboro and Southwestern University. He writes frequently on the music of Bela Bartok, and in 1999 published a book on Bartok’s opera Duke Bluebeard’s Castle with Oxford University Press.

The Class of 1960 Scholars Fund, established at their 25th Reunion, brings eminent researchers from other colleges and universities to campus to give colloquia.