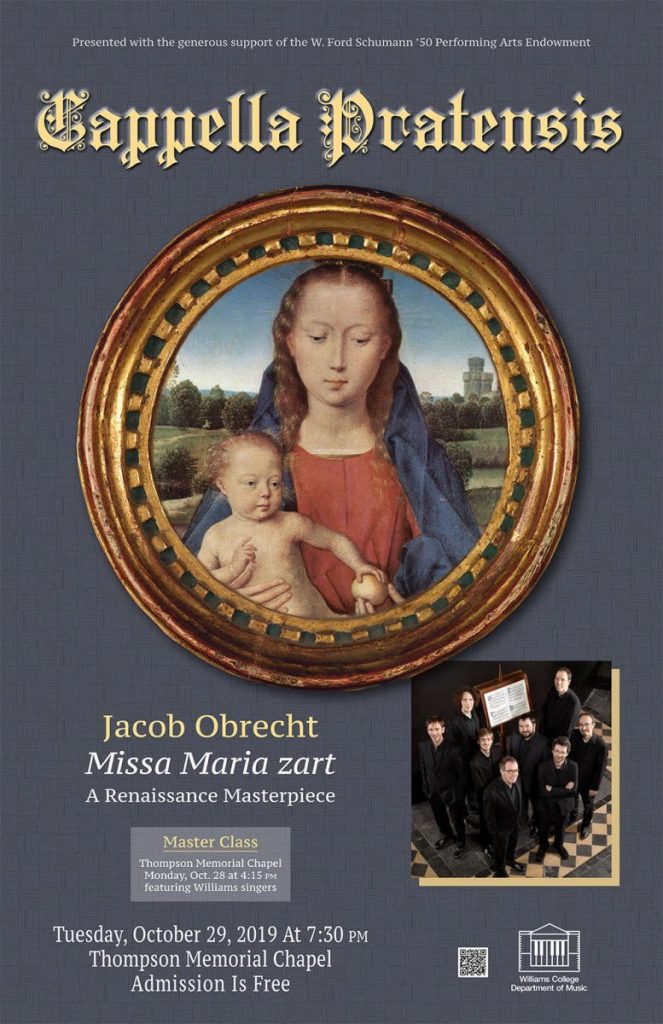 Cappella Pratensis, on tour in North America from the Netherlands, presents a concert titled “Missa Maria zart – A Renaissance Masterpiece” as part of Williams Visiting Artist Series. The program features exquisite sacred music of the early sixteenth century, including both Gregorian chant and intricate polyphony by Jacob Obrecht, who was born in the Flemish city of Ghent in 1457/8 to one of the city trumpeters. Obrecht’s eventful career took in a succession of choirmaster posts throughout the Low Countries as well as to Italy, where he served the music-loving duke Ercole I d’Este in Ferrara. He also composed for the Holy Roman Emperor, Maximilian I, for whose chapel choir the centerpiece of this program, the opulent “Missa Maria zart,” may well have been intended. This dazzling Mass setting is based on a south German devotional song beseeching the Blessed Virgin for protection from disease. It is one of Obrecht’s last works; he was to succumb to the plague in 1505 while in Italy. He left more than thirty Mass settings, nearly all based on known chants or songs. His ingenuity in re-working these materials makes fascinating study, but in his lifetime he was famous for his melodic fluency – he is reported to have composed an entire Mass in a single day.

The Netherlands-based vocal ensemble Cappella Pratensis – literally ‘Cappella des prés’ – champions the music of Josquin des Prez and the polyphonists of the fifteenth and sixteenth centuries, while also venturing into new music inspired by the polyphonic tradition. Founded in 1987, the group combines historically informed performance practice with inventive programs and original interpretations based on scholarly research and artistic insight. As in Josquin’s time, Cappella Pratensis performs from mensural notation presented in a partbook or choirbook, the latter placed on a large central music stand. This approach, together with attention to such factors as the chant origins of the polyphonic repertoire, the modal system on which it is based, the influence of solmization, and the linguistic basis, creates an intense engagement with the music.

Cappella Pratensis is presented by the Williams College Department of Music with the generous support of the W. Ford Schumann ’50 Performing Arts Endowment.