Blockchain the Next Everything – an Afternoon with Stephen P. Williams 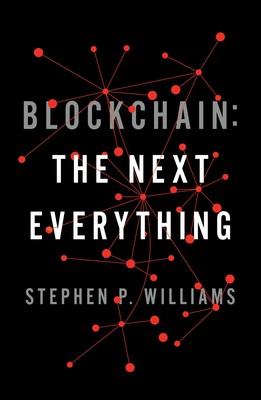 What is blockchain? Why does everyone from tech experts to business moguls to philanthropists believe it is a paradigm-shifting technology, bound to revolutionize society as significantly as the internet? In this deft, fascinating, and easy-to-digest introduction to one of the most important innovations of recent times, Stephen P. Williams answers these questions, revealing how cryptocurrencies like bitcoin are just one example among dozens of transformative applications that this relatively new technology makes possible. He interprets the complexity into digestible anecdotes, metaphors, and straightforward descriptions for readers who don’t know tech, and explains all of blockchain’s most important aspects: why this so-called digital ledger is unhackable and unchangeable; how its distributed nature may transfer power from central entities like banks, government, and corporations to ordinary citizens around the world; and what its widespread use will mean for society as a whole.

Stephen P. Williams is a journalist and author and coauthor of numerous works of nonfiction, including Blockchain: The Next Everything. He has written business and health columns for The New York Times and Newsweek and has contributed regularly to GQ, The Smithsonian, Martha Stewart Living, and other publications. He heads a sustainable fashion startup called Wm. Williams, which uses blockchain technology to manage distributed manufacturing. He lives in New York and has an MBA in Sustainability from Bard College and an MA in Communications from Stanford University.