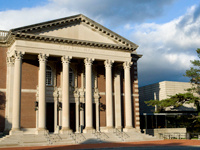 Penderecki: Threnody to the Victims of Hiroshima

Krzysztof Penderecki: Threnody for the Victims of Hiroshima

Some of the most advanced, yet most successful music for orchestra written in Europe within a generation after the Second World War has come from Poland in the socialist East, and one of the leading composers of the period is Krzysztof Penderecki, whose output includes many instrumental compositions for varied ensembles and a number of religious vocal works including the famous “St. Luke Passion” as well as an opera based on “The Devils of Loudon.”

“Threnody for the Victims of Hiroshima” was written in 1960 and quickly became one of the most frequently performed of all advanced orchestral works. Only a few pages of the score are in anything like conventional notation, for Penderecki had to invent new ways of writing down the new sounds he had conceived for production by a body of 52 string instruments. A large number of the musical elements are left indeterminate by the composer and are fixed in each performance by the skills and interests of the players. The score controls tone quality and dynamic level – much more strictly than pitch levels and their duration. It specifies such matters as fractional intervals (smaller than the conventional semi-tone), indefinite pitches and rhythms, unusual ways of bowing the string instruments, percussive ways of playing them, and particular kinds of vibrato – new requirements that demand the development of new graphic symbols. Penderecki’s new style of writing for the instruments conceals his use of a number of older, formal composition techniques. There is traditional counterpoint, for example, that may not be recognized immediately because the sound of the musical material is unfamiliar.

Penderecki composed the “Threnody” in observance of the fifteenth anniversary of the explosion of the atomic bomb at Hiroshima in August 1945.

Péteris Vasks was born in Aizpute, Latvia, on 18 April 1946, the son of a minister. He studied at the music conservatoire in Riga and later at the Lithuanian music academy in Vilnius where he received his diploma in double bass playing in 1970. He returned from Vilnius to study composition for the next five years with Velentius Utkins at the Riga conservatoire. His first professional work was as a bass player, including a period with the Riga State Opera.

His music combines traditional musical styles and contemporary techniques. It is the reciprocal relationship between nature and man, the beauty of life, and the threat of ecological and moral destruction of values that concern him. “When I think about contemporary life, it’s impossible not to realize that we are balanced on the edge of time’s end. It’s frighteningly close, but is there any point in composing a piece that only mirrors our being one step away from extinction? To my mind, every honest composer searches for a way out of the crises of his time – towards affirmation, towards faith. He shows how humanity can overcome this passion for self-annihilation that flares up in a column of black smoke from time to time. And if I can find this way out, this reason for hope, the outline of a perspective, then I offer it as my model.”

Vasks’s influences are manifold: he feels particularly close to the Polish school of composition, and has a life-long passion for the music of Witold Lutoslawski. He admires Górecki and points out that he admired him decades before he became famous. Another influence is Penderecki, who has performed Vasks music at his festival in Krakow on several occasions. Other models include Mahler, Sibelius, Messiaen, the Georgian composer Kancheli, and the American, George Crumb.

Vasks refers to himself as a “sad optimist.” “Our roots are full of sadness and suffering just as they are in many other eastern European countries. But in artistic terms our tragic history has given us a terrific impulse to be creative, to express our emotions.”

It is perhaps appropriate here to remember that only recently have Latvians experienced real freedom: for some nine centuries Latvia was an occupied country, emerging slowly from serfdom in the mid-nineteenth century and then enjoying a brief period of independence after the First World War, before the invasion of first German, then Russian forces. For Vasks, survival is the driving force behind his creative expression. “I have five children. It is important now for Latvians to have many children. When I write music, it is for me a Latvian language; I see a Latvian landscape. Nature is over everything. What gives me inspiration is a river or stream in my homeland, bird-song, the beautiful trees and miles of forests.”

A feeling of ecstasy at the beauty of nature is how Vasks describes his Cantabile, written in 1979. “I wanted to use only the white notes on the piano, to tell, in eight minutes, how beautiful and harmonious the world is.”

Cantabile is an expression for joy, with all the Vasks trademarks which he developed in later compositions. There are aleatoric passages of cell-like patterns, verging occasionally on minimalism, but without the monotony often associated with minimalist music, expressive siren-like glissandi in the string writing, pedal bass notes which seem to go on forever as the music intensifies, then suddenly drops pitch within a cadence of sensual harmony, offering what Vasks sometimes describes as an “orgasmic” release. There is a life-giving sexual energy and emotional drive throughout his compositions. For Vasks, “music is an emotional art. If there is no emotion, there is no art.”

Dmitri Shostakovich’s Fifth Symphony has been called many things, not all of them accurate: “a Soviet artist’s creative reply to just criticism,” an “optimistic tragedy,” “a masterpiece of socialist realism.” Completed during one of the most terrifying, uncertain periods in Soviet history, when dictator Joseph Stalin was supervising the arrest, imprisonment, and often execution of thousands of prominent figures, the Fifth Symphony literally saved Shostakovich’s neck. Its triumph established Shostakovich as the leading Soviet composer, a position he occupied, with numerous ups and downs, until his death.

Given its cultural and political significance, the Fifth Symphony’s conservative and “classical” personality is ironic and strange. Symphonies No. 2 (To October, 1927) and No. 3 (First of May, 1929) are sprawling and programmatic, scored for gargantuan forces and featuring concluding choruses set to jingoistic political verses. The Fourth Symphony (1935-6), which Shostakovich once called “a sort of credo of my work as an artist,” indulges in what he later described as “grandiosomania,” and is rivaled in length, instrumentation, and scale only by the Seventh (Leningrad).

Just as Shostakovich was finishing the Fourth, a scathing attack on his opera lady Macbeth of the Mtensk District was published in the official Communist Party newspaper Pravda. First performed in 1934, Lady Macbeth had been a huge hit with audiences in Leningrad and Moscow, and had already been staged abroad. But Stalin and his cultural “advisers” decided that the opera’s overt sexuality, raw language, slapstick irreverence, and dissonant musical style were inappropriate. It was banned from Soviet theaters, and Shostakovich’s future suddenly looked terribly uncertain. A casualty of this fallout was the Fourth Symphony, withdrawn after a few rehearsals under pressure from local bureaucrats – perhaps because of its depressing, funeral-march largo, so out of line with the official Social Realist optimism. When he started work on the Fifth Symphony in April 1937, Shostakovich was all too aware of how much was on the line: “I have tried in my Fifth Symphony to show the Soviet listener that I have taken a turn towards greater accessibility, towards greater simplicity.” Yet he abhorred the thought of cheapening his talent and integrity by creating music that pandered to the Party’s demands.

Shostakovich got the music down on paper quickly once the preparatory work had been done in his head, writing the third-movement Largo, the symphony’s emotional and dramatic center, in a mere three days. “My new work could be called a lyrical-heroic symphony … I aimed to show how – through a series of tragic conflicts and great inner spiritual struggle – optimism is affirmed as a world view. The subject of my symphony is the genesis of the individual. I placed man and all his sufferings at the center.” One wonders how much of that was merely intended to placate Soviet officialdom.

Yet the Fifth Symphony is clearly more “accessible” in certain ways, adhering relatively closely to classical symphonic form and built on a base of tonal harmony. It is spiritually indebted to Tchaikovsky and Beethoven. There is the same contrast between two emotional worlds drawn in Tchaikovsky: the implacable world of fate in conflict with the subjective world of human experience and limitation. Like Tchaikovsky’s Fourth and Fifth symphonies, Shostakovich’s Fifth concludes after long passages of soul-searching and doubt with an upbeat, even militaristic finale. A kinship with Beethoven appears in the Fifth Symphony’s opening bars, in the “motto” theme that jumps portentously from D to B-flat and down to A. What these opening bars bring most obviously to mind are the opening bars of Beethoven’s Symphony No. 9 and (to a lesser extent) the opening motto theme of Beethoven’s Symphony No. 5. And Beethoven was a musical and political model long admired both by Shostakovich and by the keepers of Soviet culture.

The first movement’s motto theme contrasts sharply with two more lyrical themes, the first somewhat uncertain and nervous, the second serene and free of conflict. The second-movement scherzo shows us the composer’s familiar sarcastic, ironic side, but the symphony’s prevailing mood is serious and reflective, as the length and emotional intensity of the third-movement Largo make clear. It isn’t easy to write music to follow such an exquisite confession of grief and suffering, and the finale has always been the most controversial movement. Outwardly, its spirit of celebration can seem forced, but Shostakovich included a hidden subversive message underneath all those blaring trumpets and rattling drums. It is a musical quotation from the setting of a poem (“Rebirth”) by Alexander Pushkin which Shostakovich had composed a few months earlier, one of the Four Pushkin Romances, Opus 46. The finale’s initial march theme takes its contour from the four notes setting the first three words of the poem, dealing with the struggle between genius and mediocrity in art. Here the struggle ends with the artist triumphant over his persecutors. At the time, these Romances were unpublished and unknown, since the reference was intended for Shostakovich alone – and perhaps, for future generations.

The public reaction to the premiere of the Fifth Symphony in Leningrad on November 21, 1937, was ecstatic, and has gone down as one of the most important events in the history of Soviet culture. The concert also marked the beginning of a long association between Shostakovich and the young conductor, Yevgeny Mravinsky. While the Party cultural bureaucrats were made uneasy by the display of enthusiasm for Shostakovich, in the end they accepted the public verdict. With the Fifth Symphony, Shostakovich resurrected his fortunes, narrowly escaping the catastrophe that struck down numerous friends and colleagues at the end of the 1930s. But it was hardly the last time that Shostakovich would feel like a hunted man.
— Harlow Robinson