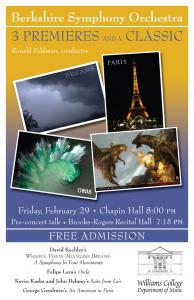 The Berkshire Symphony will give a concert on Friday, Feb. 29, at 8 p.m. in Chapin Hall on the Williams College campus. There will also be a pre-concert talk at 7:15 p.m. in Brooks-Rogers Recital Hall in Bernhard Music Center. This free event is open to the public.

WAKEFUL VISIONS/MOONLESS DREAMS is a symphony in which each of the four movements finds its point of departure in a literally quote including those from the Bible (Hosea 8:7), a Japanese haiku about the sea, Shakespeare’s Macbeth, and the writings of Marcel Proust.

Since the 1968 premiere of Second Composition for Large Orchestra by the Seattle Symphony, David Kechley has produced works in all genres, which have been performed by major orchestras, chamber groups, as well as colleges and universities throughout the United States and abroad.

His music draws from a variety of sources including the “usual suspects” of twentieth century concert music, other concert composers from the past and present, and many forms of vernacular, popular, and ethnic musics. Although these influences are generally integrated into a consistent style, the resulting musical narratives often create sharp contrasts between lyricism, virtuosity, and dramatic gesture.

Kechley’s work has been recognized by the John Simon Guggenheim Foundation, National Endowment for the Arts, North Carolina Arts Council, Massachusetts Cultural Council, and the Barlow Foundation and many of his pieces have been awarded prizes including Five Ancient Lyrics on Poems by Sappho, Concerto for Violin and Strings, In the Dragon’s Garden, and Restless Birds before the Dark Moon. One of his most recent works, BOUNCE: Inventions, Interludes, and Interjections, for guitar and saxophone, was premiered at the World Saxophone Congress in July, 2006 in Ljubljana, Slovenia by the Ryoanji Duo.

Born in Seattle, Washington, March 16, 1947, Kechley was educated at the University of Washington, Cleveland Institute of Music, and Case Western Reserve University. His teachers include Paul Tufts, Robert Suderburg, William Bergsma, James Beale, and Donald Erb. His music has been recorded and released on the Liscio Recordings, Albany Records, Reference Recording, and others.

The Berkshire Symphony is conducted by Ronald Feldman and includes nearly 70 members, half of whom are students and half of whom are professional musicians. The ensemble presents four major concerts each season. In addition to performing the great standards of orchestral repertoire a recurring theme each year is the performance of contemporary works. Championing the works of living American composers has been an integral part of the mission of the Berkshire Symphony.

The final program in the spring features the winners of the Berkshire Symphony Student Soloist Competition. This event is a great showcase for the extraordinary talent at Williams College and is always a highlight of the season.