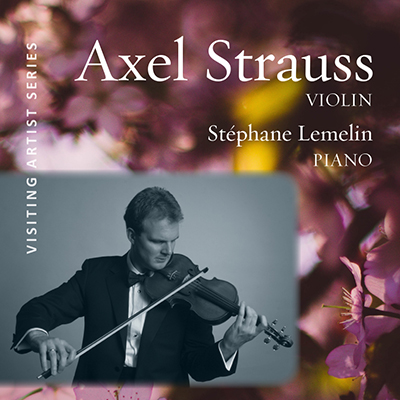 Together with pianist Stephane Lemelin, violinist Axel Strauss presents Sonata for Violin and Piano No. 2 in D Minor, op. 121 by Robert Schumann, as well as the Intermezzo from Schumann’s F.A.E. Sonata. Mr. Strauss also offers the Scherzo from the F.A.E Sonata of Johannes Brahms. The second half features César Franck, Andantino quietoso, op. 6., and Guillaume Lekeu Sonata in G, for Violin and Piano.

The first German artist to ever win the international Naumburg Violin Award in New York, Axel Strauss has been equally acclaimed for his virtuosity and his musical sensitivity. The Salt Lake Tribune praised his well-rounded artistry by saying, “Strauss quickly established that he is a virtuoso to be reckoned with. But amid his technical acumen, there was a genuine musician. His interpretive prowess was delightful.”

Mr. Strauss made his American debut at the Library of Congress in Washington DC and his New York debut at Alice Tully Hall in 1998. Since then he has given recitals in major North American cities, including Boston, Chicago, Cleveland, Los Angeles and San Francisco. In 2007 he was the violinist in the world premiere of “Two Awakenings and a Double Lullaby” – written for him by Pulitzer Prize winning composer Aaron Jay Kernis.

Mr. Strauss has performed as soloist with major orchestras in North America, Europe and Asia and has collaborated with conductors such as Maxim Shostakovitch, Rico Saccani, Joseph Silverstein, and Alasdair Neale. Mr. Strauss has also served as guest concertmaster of the Berlin Philharmonic as well as the Montreal Symphony Orchestra.

His recordings include the Brahms violin concerto (BPOlive), the violin version of the Sonatas Opus 120 by Brahms (Organum) and the Duo for Violin and Cello by Kodaly (Oehms Classics). For the Naxos label he has recorded a selection from Mendelssohn’s “Songs without Words”, the 24 Caprices for solo violin by Pierre Rode, the last three violin concertos by Rodolphe Kreutzer and the complete works for violin and piano by George Enescu. Amadeus Press has issued a DVD featuring Axel Strauss in concert at Steinway Hall in New York City.

Since his European debut in Hamburg in 1988, Axel Strauss has been heard on concert stages throughout Europe. He has given concerts in Moscow, Vilnius, Berlin, Bremen, Leipzig and Nuremberg. Concert tours have taken him to Armenia, Azerbaijan and Romania. He has also toured South America and performed in Japan with the Philharmonic Violins Berlin.

At the age of seventeen he won the silver medal at the Enescu Competition in Romania and has been recognized with many other awards, including top prizes in the Bach, Wieniawski and Kocian competitions. Mr. Strauss studied at the Music Academies of Lübeck and Rostock with Petru Munteanu. In 1996 he began working with the late Dorothy DeLay at The Juilliard School and became her teaching assistant in 1998. He has also worked with such artists as Itzhak Perlman, Felix Galimir, and Ruggiero Ricci, and at the Marlboro Music Festival with Richard Goode, Mitsuko Uchida and Andras Schiff. Mr. Strauss has been residing in the United States since 1996. He maintains a busy performance schedule and serves as Professor of Violin at the Schulich School of Music of McGill University in Montreal. Before moving to Canada he was Professor of Violin and Chamber Music at the San Francisco Conservatory of Music.