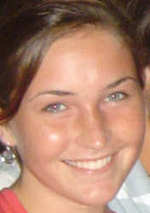 The Williams College Department of Music will present a Junior Recital featuring Augusta Caso ’09, soprano on Sunday, May 11, at 3 p.m. in Brooks-Rogers Recital Hall. This free event is open to the public.

Augusta Caso, initially from Phoenix, Maryland, is currently a junior at Williams College and is majoring in music. Before coming to Williams, she sang with the Peabody Children’s Chorus for eight years, in numerous school choirs, and with the Maryland All-Sate Chorus for four years. Since coming to Williams, where she studies with Marlene Walt, classical solo vocal performance (and, hopefully one day soon, opera) has quickly become her passion and her primary concentration. Augusta also sings in both the Concert and Chamber Choirs, played “Johanna” in the recent Cap ‘n Bells production of Sweeney Todd, and has had the opportunity to perform with various other ensembles on campus. She very much enjoys conducting and arranging, and was previously a member and music director of Ephoria, one of William’s all-female a cappella groups. Her other interests include languages and travel, reading, creative activities, yoga and running. This summer, Augusta is excited to spend five weeks in Germany studying at the Neil Semer Vocal Institute. She hopes to go on to graduate school in vocal performance after Williams.