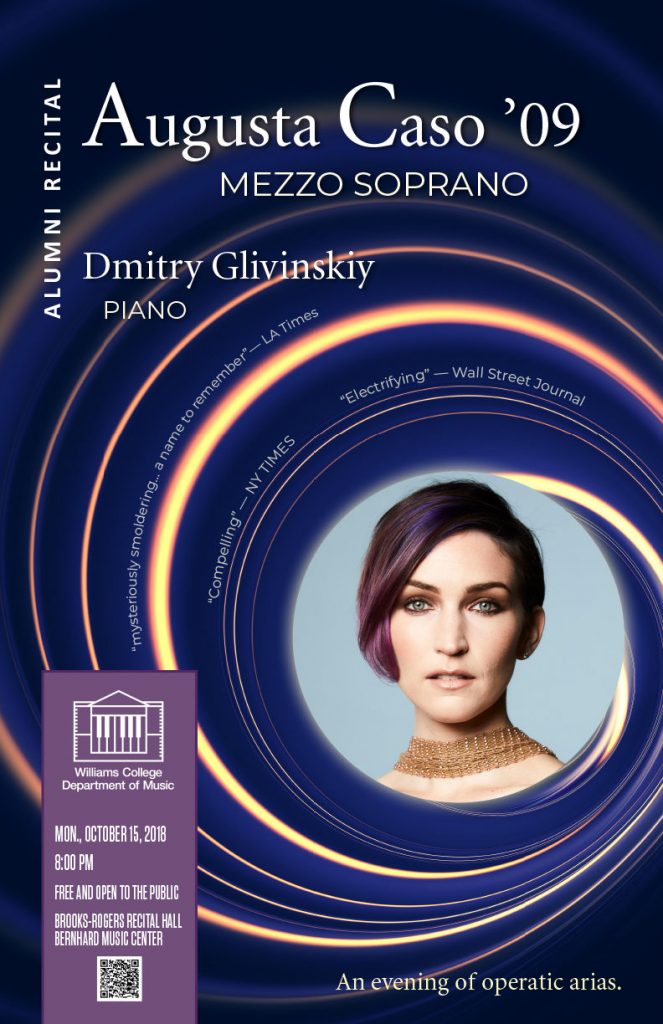 Hailed by the LA Times as “mysteriously smoldering…a name to remember,” mezzo-soprano Augusta Caso is becoming known for her “silken…beguiling mezzo” and “fine subtle acting” (Brooklyn Daily Eagle). This past season, Augusta made her makes her Metropolitan Opera debut as a Flowermaiden in Wagner’s Parsifal under the baton of Maestro Nézet-Séguin. She made her Los Angeles Opera debut in Getty’s Canterville Ghost as First Otis Twin, also performing the role with the Center for Contemporary Opera in New York in 2017, and covered the title role in Tancredi in the mainstage production and sang the role of Isaura in Tancredi rifatto with Maestro Will Crutchfield at Teatro Nuovo. Ms. Caso most recently sang the title role in Carmen with New York Opera Collaborative. She looks forward to several new music projects in the near future, including the title role in Laura Schwendinger’s Artemisia with Center for Contemporary Opera, and the creation of a new piece about Marilyn Monroe by JacobTV at National Sawdust called Able to Be/Harper Songs.

In 2016-2017, Ms. Caso made her debut with the Center for Contemporary Opera as Anaïs Nin in a double-bill of Andriessen’s Anaïs Nin and Odysseus’ Women, directed by Jorinde Keesmaat. The New York Times called her “compelling…Ms. Caso’s acting and her expressive, poignant singing combined for a courageous performance.” Making her European debut in the same role at the Musiekgebouw aant’IJ in Amsterdam, the performance earned her a nomination for the Schaunard award in the Netherlands, the Volkskrant calling it “a star role.” Ms. Caso will return to Amsterdam to reprise Anaïs Nin for the celebration of Louis Andriessen’s 80th birthday in 2019.

Additionally last season, Ms. Caso performed the role of Gilade in the US premiere of Vivaldi’s Il Farnace at the Spoleto Festival, USA, conducted by David Bates and directed by Garry Hynes. She sang the roles of Suzuki in Madama Butterfly and Hélène in La Belle Hélène at Opera North; Blanche in Dialogues of the Carmelites with Resonanz Opera; covered the role of Suzuki and sang Mère Jeanne in Dialogues at Sarasota Opera; and sang Dorabella in Così fan tutte with Divaria Productions (NYC). Ms. Caso performed with the Ars Musica Chorale (NJ) as the alto soloist in Rossini’s Petite Messe Solennelle and performed the alto solos in the Reading Choral Society’s Messiah (PA).

In 2015-2016, Ms. Caso sang Prince Charming in Cendrillon with Utopia Opera; the title role in Cenerentola with Opera on Tap (NY); the cover of Mercédès in Carmen as an Emerging Artist with St. Petersburg Opera (FL); and performed Mahler’s Rückert-Lieder with the Manchester Symphony Orchestra; Berlioz’s Les nuits d’été with the South Shore Symphony; and Handel’s Messiah with the Winston-Salem Symphony. Augusta was a finalist in Annapolis Opera’s Competition and winner of the Adrienne Goldberg Study award, and joined Caramoor’s Bel Canto program as an Apprentice Artist.

Ms. Caso’s 2014-2015 season included role debuts as Rosina in Il Barbiere di Siviglia with Regina Opera (Brooklyn, NY); Cherubino in Le Nozze di Figaro with Bronx Opera; and Stéphano in Roméo et Juliette with Maryland Lyric Opera. Additional operatic roles have included Poppea in L’incoronazione di Poppea and Sesto in La Clemenza di Tito. Augusta received her Bachelor of Arts with Highest Honors from Williams College in Williamstown, Massachusetts, and her Master of Music from the University of Oklahoma, where she was the recipient of a Weitzenhoffer College of Fine Arts Opera Fellowship. Augusta grew up in Phoenix, Maryland and studies with Andrea DelGiudice.