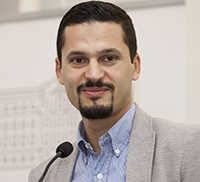 Farid Hafez will give a talk on race and racism in Europe. He connects his expertise on contemporary Islamophobia with larger questions of colonialism, anti-Semitism and the imagination of a post-racial, post-Holocaust era in Europe following the end of World War II. Hafez will especially focus on relevant issues of the rising far-right in today’s Europe.

Farid Hafez, PhD (political science, University of Vienna), is currently lecturer and researcher at the University of Salzburg, Department of Political Science and Sociology. He is also Senior Researcher at Georgetown University’s ‘The Bridge Initiative’.  Since 2010 he is the editor of the Islamophobia Studies Yearbook, and since 2016,  co-editor of the annual European Islamophobia Report. In 2009, Hafez received the Bruno Kreisky Award for best political book of the year for his anthology Islamophobia in Austria (co-ed. with John Bunzl).

This event is part of a yearlong series on Race and Democracy sponsored by the W. Ford Schumann ’50 Program in Democratic Studies.