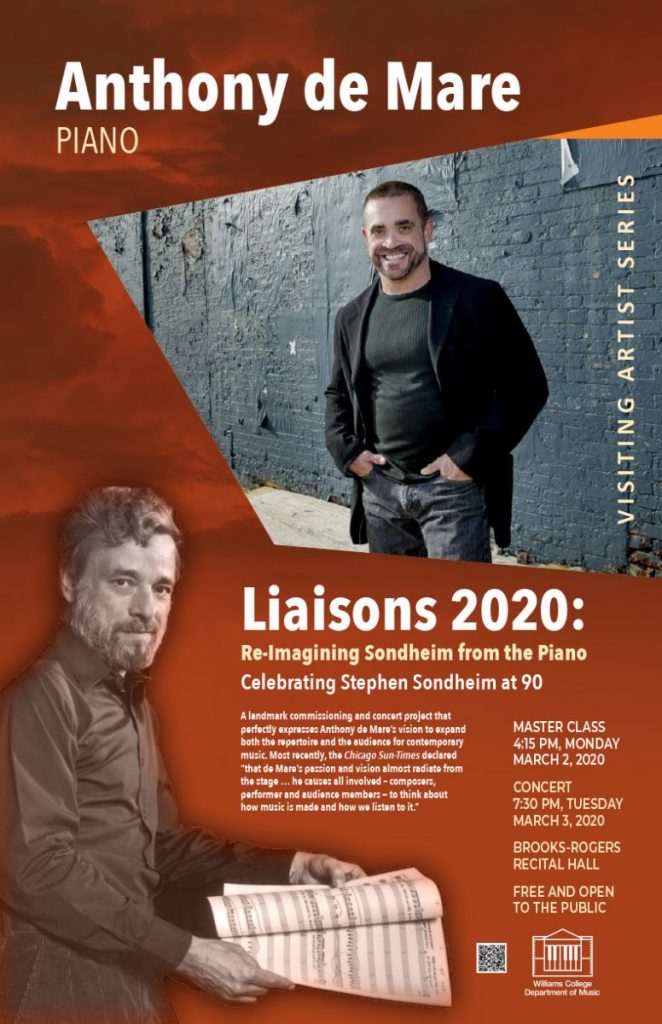 Pianist Anthony de Mare is one of the world’s foremost champions of contemporary music. His masterclass and performance coincide with Sondheim@90@Williams, a celebration of the composer Stephen Sondheim, Class of 1950.

Praised by The New York Times for his “muscularly virtuosic, remarkably uninhibited performance [and] impressive talents,” his versatility has inspired the creation of over 60 new works by some of today’s most distinguished artists, especially in the speaking-singing pianist genre, which he pioneered over 25 years ago with the premiere of Frederic Rzewski’s groundbreaking De Profundis.

Liaisons: Re-Imagining Sondheim from the Piano is a landmark commissioning and concert project that perfectly expresses his vision to expand both the repertoire and the audience for contemporary music. Most recently, the Chicago Sun-Times declared “that de Mare’s passion and vision almost radiate from the stage … he causes all involved – composers, performer and audience members — to think about how music is made and how we listen to it.”

As creator, performer and co-producer of The Liaisons Project, de Mare has added another 27 composers to the list of those he has commissioned, and another 36 compositions to the contemporary piano repertoire. Exclusive new works from Steve Reich, Nico Muhly, Wynton Marsalis, Mark Anthony Turnage, Mason Bates, Eve Beglarian, Andy Akiho, DBR, Ethan Iverson, Duncan Sheik and William Bolcom, among others, bring the work of musical theater maestro Stephen Sondheim into the concert hall while spanning the classical contemporary, jazz, film, theater and indie worlds.

The full 3-CD box set recording of the project, produced by Judith Sherman, was released on ECM Records in 2015. The recording was named on 12 “Best Of” lists including the New York Times, San Francisco Examiner, Washington Post, The Daily Beast, and NPR and was included as a winner of the 2016 Grammy Award for Classical Producer of the Year.

In preparation for Sondheim’s 90th birthday in 2020, a select number of new composers have been commissioned for the Project, which will bring the total compendium to 50, accompanied by a national tour in celebration of this landmark.

As new music curator for The Sheen Center for Thought and Culture in NYC, he continues to create theatrical concerts, most recently, focusing on the works of Debussy (featuring 12 of New York’s most prominent pianists), an evening celebrating the work of Erik Satie in his 150th Birthday year (2016), and in 2018, Olivier Messiaen’s complete “Vingt Regards sur l’Enfant Jesus” performed by five of New York’s most prominent pianists.

In addition, a brand new two-piano project with Italian pianist Emanuele Arciuli entitled “The American Explorer” will launch in 2019.

Sold-out houses and raves in the New York Times greeted all three New York premieres of The Liaisons Project at Symphony Space. Anthony Tommasini of the New York Times extolled Mr. de Mare’s “formidable virtuosity” and “dynamic & stylish playing.” Joshua Kosman of the San Francisco Chronicle raved that “Liaisons is a revelation… de Mare’s playing was superb throughout, a combination of lyrical reflection and extroverted pyrotechnics.” In a live onstage interview, Mr. Sondheim called the project “flattering… to hear composers take my music and take it seriously is a thrill.”

Mr. de Mare gave the Australian premiere of Liaisons both in Melbourne and Sydney, and the U.K. premiere in a tour sponsored by SERIOUS that included Southampton, Manchester and the London Jazz Festival at the Barbican. The adaptability of the program to jazz, theater and classical spaces speaks once again to the range of de Mare’s versatility as a performer. He has performed Liaisons programs across the U.S. and internationally including Virginia Tech Center for the Arts, SF Jazz, The Ravinia Festival, the Gilmore Keyboard Festival, the Bari Piano Festival in Italy, Cal Performances-Berkeley, the Virginia Arts Festival, the Clarice Smith Performing Arts Center, Schubert Club in Minneapolis, Mondavi Center at UC Davis, Rockport Music Festival, the Cliburn Series in Fort Worth, and Music at Meyer in San Francisco.

With the release of the ECM recording, Mr. de Mare was featured on NPR’s “All Things Considered” and was invited to perform on Lincoln Center’s American Songbook series event “Reich and Sondheim: In Conversation.” Liaisons was chosen to represent Mr. Sondheim’s oeuvre in the festivities surrounding his receipt of the 2013 Medal of Honor from the MacDowell Colony at the Monadnock Music Festival. An excerpt from the project was also featured in the HBO documentary “Six by Sondheim.”

He has been profiled by the Chicago Tribune, The New Yorker, the New York Times, Time Out NY, The Contrapuntist, BroadwayWorld.com, among others, and has been heard in performance and interviews on nationally syndicated shows with WNYC’s John Schaefer, NPR, WQXR and numerous stations across the country.

Since his debut with Young Concert Artists in 1986, his accolades and awards include First Prize and Audience Prize at the International Gaudeamus Interpreters Competition (The Netherlands) and The International Competition of Contemporary Piano Music (France). He gave his Carnegie Hall debut at Zankel Hall in 2005. Among his best-known performances are his national tour of The American Piano (with pianist Steven Mayer); Playing With Myself, a multi-media concert event that enjoyed a sold-out run at HERE Arts Center (New York, 2001); Missing Peace, an eclectic series of old and new works inspired by the exhibition The Missing Peace: Artists Consider the Dalai Lama at The Rubin Museum in NYC; Cool ~ A Journey into the Influence of Jazz and Unities: Music of Pride and Celebration. Mr. de Mare has also collaborated and performed with the Bang-On-A-Can All Stars, Meredith Monk/The House, and the Chamber Music Society of Lincoln Center, among many others.

Mr. de Mare has nearly twenty recordings in his discography. In addition to the current release of LIAISONS on ECM, his recording SPEAK! ~ The Speaking-Singing Pianist (Innova) is the first disc devoted completely to the genre he created over twenty years ago. For Out of My Hands (KOCH E1), American Record Guide raved that “his exquisite touch and impassioned beauty of utterance imbue this program with artistry of the highest order.” American Record Guide also named Wizards and Wildmen: Piano Music of Charles Ives, Henry Cowell and Lou Harrison (CRI /New World) as one of 2000’s Ten Best Releases. Other acclaimed recordings include: Pianos and Voices: Music by John Cage and Meredith Monk, an unprecedented pairing of these two mavericks of the American avant-garde (Koch), Frederic Rzewski – Anthony de Mare (O.O. Discs), and Oblivion, with cellist Maya Beiser (Koch).

Currently professor of piano at Manhattan School of Music and New York University, his commitment to education is evidenced by his residency work at universities across North America, in which he has inspired a whole new generation of pianists and contemporary music advocates, encouraging them to initiate creative strategies as innovative entrepreneurs. He currently serves as new music curator for The Sheen Center for Thought and Culture in NYC.