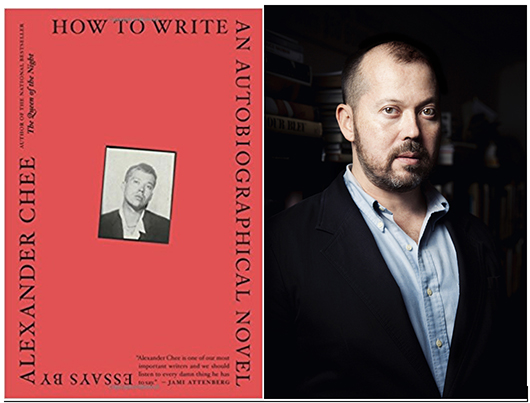 Acclaimed novelist, Alexander Chee, will read from his newest book, How to Write an Autobiographical Novel, which has been praised as a “masterpiece” of the essay form. The subjects of Chee’s essays range widely, from craft essays to autobiographical pieces that startle in their forthright view of world and self.

In a recent review in the New York Times, J. W. McCormack describes the scope of Chee’s subject matter: “[F]ew books fit the bill of ‘autobiographical novel’ better than this collection, which is arranged in rough coming-of-age chronology, from the author’s sexual awakening as an exchange student in Mexico (‘a summer of wanting impossible things’) to the death of his father at 43, following a car accident, when Chee was 15; his beginnings as a writer at Wesleyan University, where he studied under Annie Dillard; his tenure in San Francisco at the height of the AIDS crisis; the publication of his (explicitly autobiographical) first novel, Edinburgh, in 2001; and his maturity as a reader, writer and instructor who longs, in the aftermath of the 2016 presidential election, to lead his students ‘to another world, one where people value writing and art more than war.’ The book ends with the beautiful sentiment, cribbed from an email Chee wrote his students after the election of Donald Trump, that ‘a novel, should it survive, protects what a missile can’t.'” McCormack concludes: “Throughout, Chee endeavors to catch himself at a distance and reckon, ever humble and bracingly honest, with the slippery terrain of memory, identity and love.”

Alexander Chee’s reading is presented by the American Studies program, with support from the Minority Coalition, English, Women’s, Gender and Sexuality Studies, Asian Studies, the Lecture Committee, and the Finance Committee of the Student Council, and is co-sponsored by the W. Ford Schumann ’50 Program in Democratic Studies as part of a year-long series on Race and Democracy.

Alexander Chee is a contributing editor at The New Republic, and an editor at large at VQR. His essays and stories have appeared in The New York Times Book Review, T Magazine, Tin House, Slate, Guernica, and Best American Essays 2016, among others. He is winner of a 2003 Whiting Award, a 2004 NEA Fellowship in prose and a 2010 MCCA Fellowship, and residency fellowships from the MacDowell Colony, the VCCA, Civitella Ranieri. He is an associate professor of English and Creative Writing at Dartmouth College.