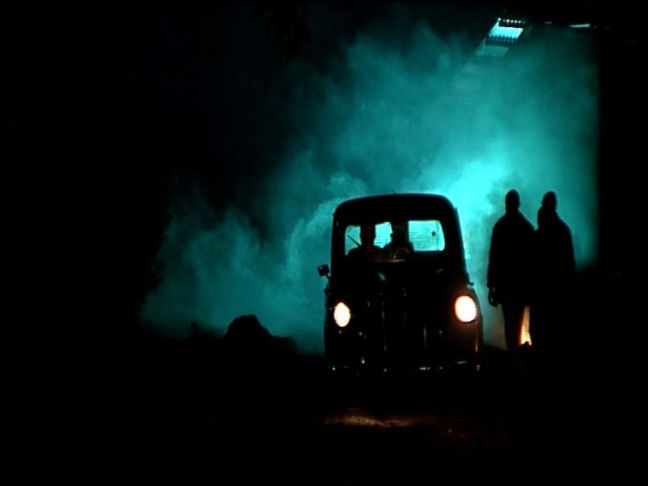 The power of food to transform, rescue and wreak revenge is eloquently demonstrated in this Nigerian film. A single woman, who makes and sells street food, is struggling to bring up her family. Rent and school fees are months in arrears, and her young son desperately needs kidney treatment.

Just when it seems things can get no worse, a gang of armed youths break in to the house. They demand food and threaten to kill the family if the meal is not tasty. The food is delicious, and the gang, mollified, leaves. They return regularly, giving the family money and household items in return for the woman’s delicious cooking.

But when a robbery goes wrong, they kill the young boy’s kidney specialist, and the cozy relationship gives way to a dangerous atmosphere. The mother decides that the gang must go, and prepares a meal to send them on their way.

MEOKGO AND THE STICK FIGHTER (CONFIRMED)

A haunting tale spiced with magical realism, Meokogo & the Stick Fighter is the story of Kgotso, a recluse stickfighter who lives a solitary life high up in the Maluti Mountains of Lesotho. Whilst tending sheep and playing his concertina, he sees a beautiful and mysterious woman staring at him dreamily from the water. This story of unrequited love and sacrifice captures both the cruelty and the beauty of African magical beliefs.

A lot can happen in the Ethiopian countryside on the long way to the market. A father and his son follow everybody’s good advice…and come back to their senses. Adapted from a traditional Ethiopian Folk Tale, Menged is very much a parable for Ethiopia today: A country in transition between modernism and traditional belief.

This film features two remarkable examples of how living with the virus has changed over time: After living a high profile life as a model and wife to the then coach of the Zimbabwe national football team, Tendayi Westerhof stunned the nation in 2002 by becoming the first high-profile person to go public about her HIV-positive status. This beautiful woman went on to become a public figure in a very different way, as an elegant and glamorous AIDS activist in the world of modeling and the public media. Pamela Kanjenzana, living a very different life with her HIV infection in one of Zimbabwe’s high density suburbs, is also an effective AIDS activist. She survives by living positively.

After an eight-year absence, maverick director Jean-Pierre Bekolo (Quartier Mozart, Aristotle’s Plot) returns with his magnum opus, Les Saignantes, a superbly photographed, stylishly edited, and tastefully scored film about two young femmes fatales who set out to rid a futuristic country of its corrupt and sex obsessed powerful men. In this sci-fi-action-horror hybrid, Majolie and Chouchou, exquisitely played by Adèle Ado and Dorylia Calmel, navigate a sordid world where sex, money, politics and death are perniciously imbricated. Young, attractive, fashionable and lethal, they are on a mission to change the destiny of their country. Reveling in its display of excess, committed to aesthetics of cool, Les Saignantes is one of the first science fiction films to come out of Africa.

Kongo lives in Brussels, in the Matonge district, on which he is writing a book. His editor wants a kind of traveler’s book spiced with ethnic ingredients. However, the writer is inspired by the vision of complex and tormented souls that he meets at all crossings. Kongo Congo follows invisible ways connected to the Congolese history and its ghosts. How is it possible to stand upright in this chaotic history? – By having the “juju”, self confidence, and Beatrice’s love.

A LOVE DURING THE WAR (CONFIRMED)

What are the consequences when rape is used as a weapon of war? This moving documentary explores this question from the perspective of women in Africa, where this tragedy is witnessed again and again.

Aziza and her husband were separated when the Congo-Kinshasa war broke out in 1996. Six years later, they reunite in Kinshasa, the capital of the Democratic Republic of the Congo (formerly Zaire). They are now rebuilding their family life with their four children. However, the souvenirs of the horrors suffered by other women in eastern DRC during the war still haunt journalist Aziza. She wonders what happened to Feza, the little girl for which she used to care. Soon, she feels obliged to return to this part of the country where women have started denouncing the abuses they suffered during the war.

At the age of 25, the artist-caricaturist BB finds himself faced with an impossible choice. Son of the inflexible imam Karamo, the guardian of his village’s ancestral traditions, BB is chosen to be his father’s worthy successor. But he refuses to accept his destiny, preferring to work independently and live life to the fullest with his love, the beautiful young computer scientist Kesso. A very impressive film that finds a new approach to capturing the tradition-versus-modernity theme so frequently seen in African cinema.