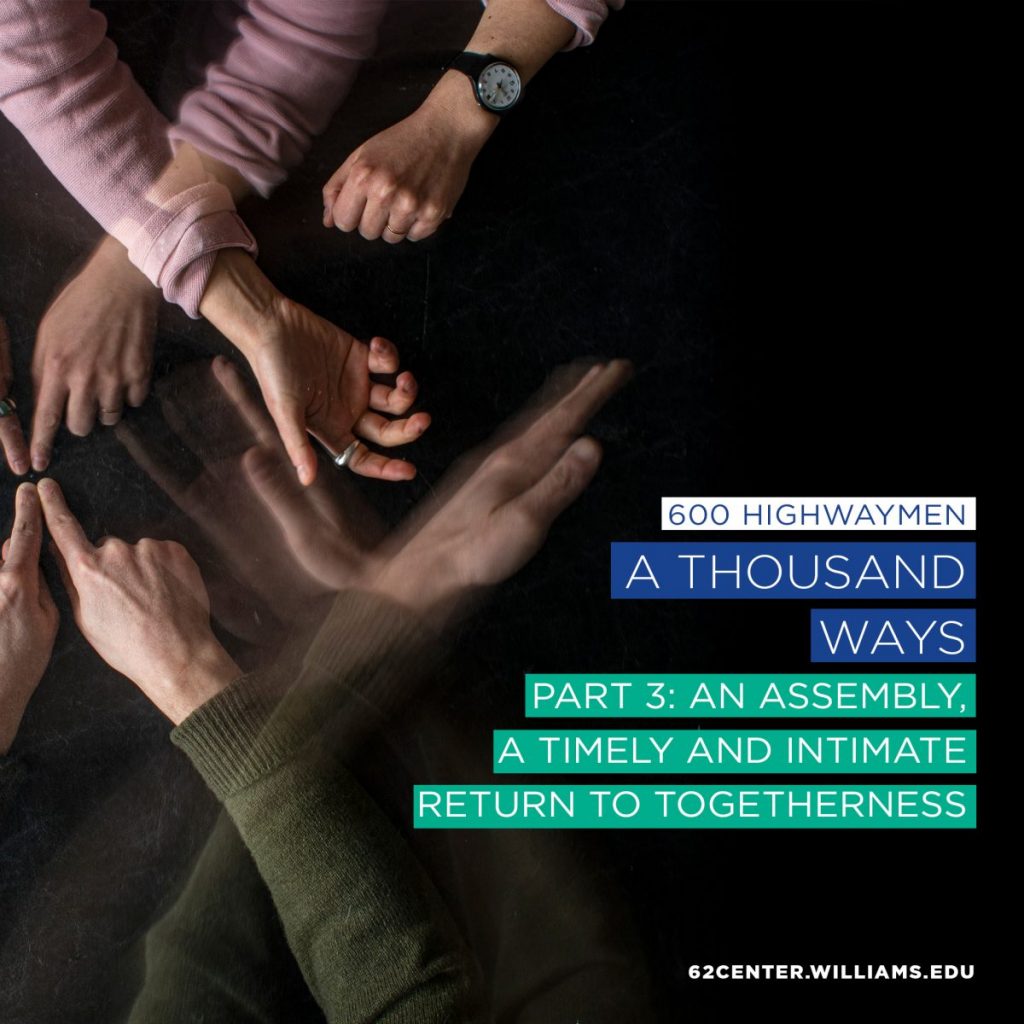 A THOUSAND WAYS (Part Three): An Assembly brings together an audience of strangers to construct a unique and intimate theatrical event. Using a stack of instructive notecards and a few simple props, this small group of people collectively recount a timeless story of perseverance—of audacity in the face of uncertainty. This elucidating experience invites participants to consider each other—individually and collectively—and the significance of their coming together.

This is an invitation. Will you attend?

A THOUSAND WAYS (Part Three): An Assembly is the final experience of award-winning 600 HIGHWAYMEN’s triptych of encounters between strangers.  While Parts One and Two brought together pairs of strangers to meet across phone lines (Part One) and through glass panes (Part Two), Part Three: An Assembly is a public convening – an intimate return to the act of communal gathering.

Each installment of A THOUSAND WAYS, which has been experienced around the world, plumbs the essence of theater—bringing people together in the creation of a moving live experience—to counteract social isolation exacerbated by a global public health crisis. The work explores the line between strangeness and kinship, distance and proximity, and how the most intimate assembly can become profoundly radical.

The New York Times, called Part One: A Phone Call, “Splendid. Funny and sweet and unexpectedly moving” and Part Two: An Encounter ”a work of inquisitive humanity and profound gentleness, which over the course of an hour buffs away the armor that lets us proceed through our days brusque, numb and antagonistic.”

This production was commissioned by The Arts Center at NYU Abu Dhabi, Stanford Live at Stanford University, The Public Theater, and Festival Theaterformen. Part Three: An Assembly was developed through a residency partnership with the University of Colorado, Colorado Springs. Original support for the production was provided by The Pew Center for Arts & Heritage, Philadelphia.

600 HIGHWAYMEN, “standard bearers of contemporary theater-making” (Le Monde) who have “quietly been shaking up American theatre since 2009” (The Guardian) have always centered the creation of intimacy among strangers in their artistic practice. The work exists at the intersection of theater, dance, contemporary performance, and civic encounter. Though the processes are varied, each project revolves around the same curiosity: what occurs in the live encounter between people.  600 HIGHWAYMEN has been called the “the standard-bearers of contemporary theater-making” by Le Monde, and “one of New York’s best nontraditional theater companies” by The New Yorker. They have received commissions from The Public Theater, Temple Contemporary, Salzburg Festival, and Festival Theaterformen. They are recipients of an Obie Award and Switzerland’s ZKB Patronize Prize, and nominees for Austria’s Nestroy Prize, the prestigious Alpert Award and NYC’s Bessie Award. In 2016, Browde and Silverstone were named artist fellows by the New York Foundation for the Arts.