A Taste of Home: Foods of the Jewish Diaspora 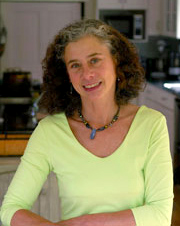 Darra Goldstein, Professor of Russian at Williams College and editor of Gastronomica: The Journal of Food and Culture, will give a lecture and demonstration on the food of Jewish exile, which will be followed a tasting. Part of a year-long series of lectures, films and events sponsored by the program in Jewish Studies, the Bronfman Committee and the Wiener Lecture Fund.

Since earning her Ph.D. in Slavic Languages & Literatures from Stanford University, she has published numerous books and articles on Russian literature, culture, art, and cuisine, and has organized several exhibitions, including Graphic Design in the Mechanical Age and Feeding Desire: Design and the Tools of the Table, 1500-2005, at the Cooper-Hewitt, National Design Museum.

She is also the author of four cookbooks: A Taste of Russia (nominated for a Tastemaker Award), The Georgian Feast (winner of the 1994 IACP Julia Child Award for Cookbook of the Year), The Winter Vegetarian, and Baking Boot Camp at the CIA. She has consulted for the Council of Europe as part of an international group exploring ways in which food can be used to promote tolerance and diversity, and under her editorship the volume Culinary Cultures of Europe: Identity, Diversity and Dialogue was published in 2005 to commemorate the 50th anniversary of the signing of the European Cultural Convention.

Goldstein has also consulted for the Russian Tea Room and Firebird restaurants in New York City and is currently Food Editor of Russian Life magazine. She serves on the Board of Directors of the International Association of Culinary Professionals and is General Editor of California Studies in Food and Culture (University of California Press), a book series that seeks to broaden the audience for serious scholarship in food studies and to celebrate food as a means of understanding the world.